Is it okay to say that Christianity is not a religion? 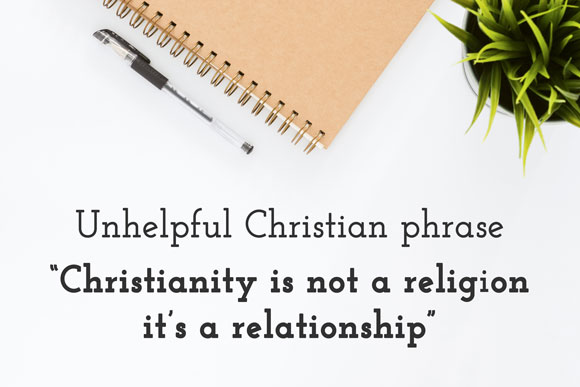 This is our ninth post to help you to be as clear as possible in speaking with unbelievers, explaining why some common Christians phrases shouldn't be used in witnessing encounters as they are either unbiblical or are very easily misunderstood by the unbeliever.

The ninth phrase not to use is: "Christianity is not a religion, it’s a relationship".

Why not to use it:

• It’s untrue:The dictionary definition of the word ‘religion’ is the "belief in a superhuman controlling power, especially a personal God" (Oxford). Therefore, since Christianity does believe in God, it is rightfully classified as a religion.

• It’s unbiblical: The Bible implies Christianity is a religion (James 1:26) and speaks positively about the word religion and its effects (James 1:27).

• It’s confusing: Unbelievers hearing this phrase get utterly confused, because they are hearing that Christianity doesn’t believe in God or have a set of beliefs - which is not what you want someone to think.

Instead, it's better to say:

• "Christianity is not a works based system where we have to earn God’s favor by doing good or church-going. Instead God offers forgiveness to sinners like us as a gift, through faith in what Jesus has done, so we can have peace with God and be with him forever in heaven."